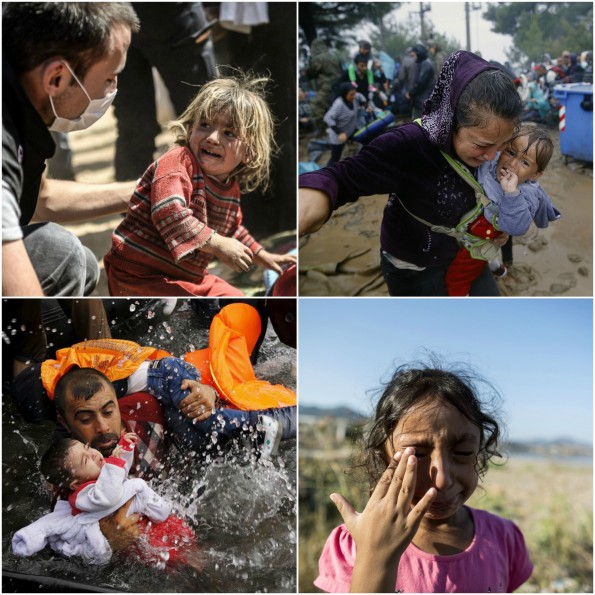 There has been a lack of reportage or knowledge of where we are today with the Syrian Refugee crisis.

As new events arise, in which most are definitely extremely important, some tend to forget there is still a massive migration of Syrians from country to country, seeking a home. Seeking a safe haven.

To spread the importance of the issue, here are a few important videos to reference.

A video by The Guardian, it talks about a family of Syrians, numerous in size, travelling from Hungary to Austria due to the Hungarian government’s regulations on the Syrians and their ability to remain in the country. As they travel on foot, some Syrians and Hungarians announce the differences between generalization and reality. Although the government sends a negative image of Hungarians as a whole, most are extremely accepting and very willing to help them, either with shelter, money, food, water, and more. As one Syrian man beautifully stated to a Hungarian woman saying she could offer him and his children a ride, everyone walking with him was family, and if anything happened to them, it would have to happen to him as well.

The video also shows that these refugees are not poor, uneducated people. They have high levels of education, some were even rich before the war, and they have a joy and confidence that one could only imagine in such a time of struggle. When they are safely put on a bus and awake the next day unharmed, we see smiles on their faces. Faces showing their love for good humans and love of God who has allowed them to live another day.

When the train arrived in Germany, officers smiled as they greeted the children. Teddy bears were given, and love was shown. This is humanity. This is what we must fight for.

The video by Vice News shows the brutal reality of refugees in the Middle East fighting to make their way to safety. It focuses on a refugee camp in Lebanon, where Syrians live under horrifying conditions, struggling to keep the roofs of their hand-made homes above their heads. Not to mention, it is the middle of winter.

Illness is shown to spread extremely quickly as freezing cold temperatures predominate and no sight of medicine is near. For women and men with even only one child, this proves to be one of their greatest’s battles. Not knowing whether their child will die, risking everything for their survival, and seeing everything else around them, whether it be other families with children dying or death taking anyone else’s lives, is something that must unfortunately be dealt with each day.

A beautiful clip that is shown is the reporter having a snowball fight with a few Syrian children. This shows the beauty of humanity and morality. It shows the good that lies within us all.

The mention of tasing and beating is also in the video, as Syrians describe their encounter with the municipality, as they were rejected assistance. When a woman was beaten, everyone rose up bravely and even attacked those beating the woman. Although encountering extreme injury and possibly death, they were fighting for the respect of the woman. To those who say there is no respect for women anywhere in the Arab world, see if this changes your mind.

Seeing people fight over blankets, fearing government, and the mayor struggling to hide the reality that he indeed knew of the brutality caused by those instructed by him to “provide assistance” to the Syrians, has reinforced for me the importance of the issue at hand.

A second and final piece from Vice News, this video talks of a Syrian refugee family currently in Cleveland, Ohio today, and shows the distinction between Syrians in Europe and the Middle East, as exposed by the previous two videos. The father, who speaks for most of the video, describes to his children and the reporter that they mustn’t go outside too much because the neighbors are not too accepting of immigrants. To reassure his children as his wife sat in her seat, clearly sad and hurt by the reality, he told them that they believed this of all immigrants not just Syrians, and that one day when they didn’t think like this, all would be well.

The video also touches on the political election coming up very soon. With risk of Donald Trump being elected, being a Muslim or a refugee has become extremely dangerous. The family fears for his election because of what could occur. With a racist on the ballot wishing to deport all Muslims, his family has no choice but to hold on to hope and to wish that the American people vote correctly.

Finally, the Vice News piece speaks of what it was like during the war in Syria. Being part of a family that suffered through it all but managed to escape, this first-person telling of the occurrences is one of the greatest sources of information, and serves as a wake up call to viewers who are able to wake up normally everyday with no fear of attack or death. The father speaks of the innocent men, women, and children, who had done nothing wrong and were wrongfully killed and bombed. One of his daughters also speaks of the beauty there once was that was completely devastated by the war. Finishing the video, the father claims he wishes that the memories of war in Syria would be wiped from his children’s’ minds, and even his and his wife’s.

Please support the cause, vote for the candidate that will support refugees and Islam in America, and be human.